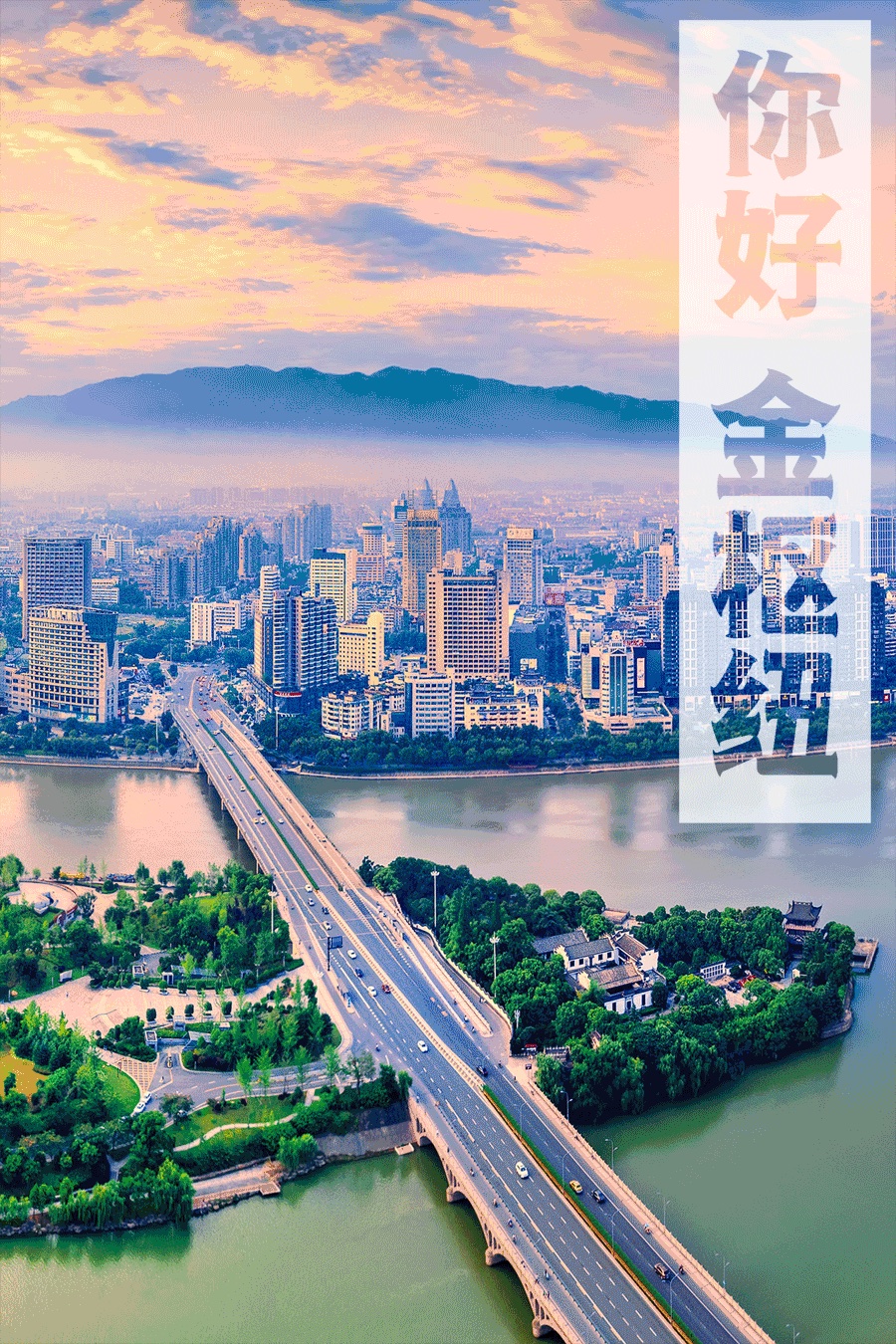 She has created many miracles of turning stone into gold.

Her name is one of the most poetic place names in China - Jinhua.

Jinhua is a basin surrounded by mountains and rivers on three sides.

Jinhua is an inland area of a coastal province.

Not by the sea or along the border,

but it has never cut off contact with the world.

China is the origin of rice cultivation in the world. The ancestors who lived in the Shangshan of Pujiang River have been proved to be the first people to grow rice. In this way, rice, which gradually spread to all parts of the world, was the earliest carrier connecting Jinhua with the world? 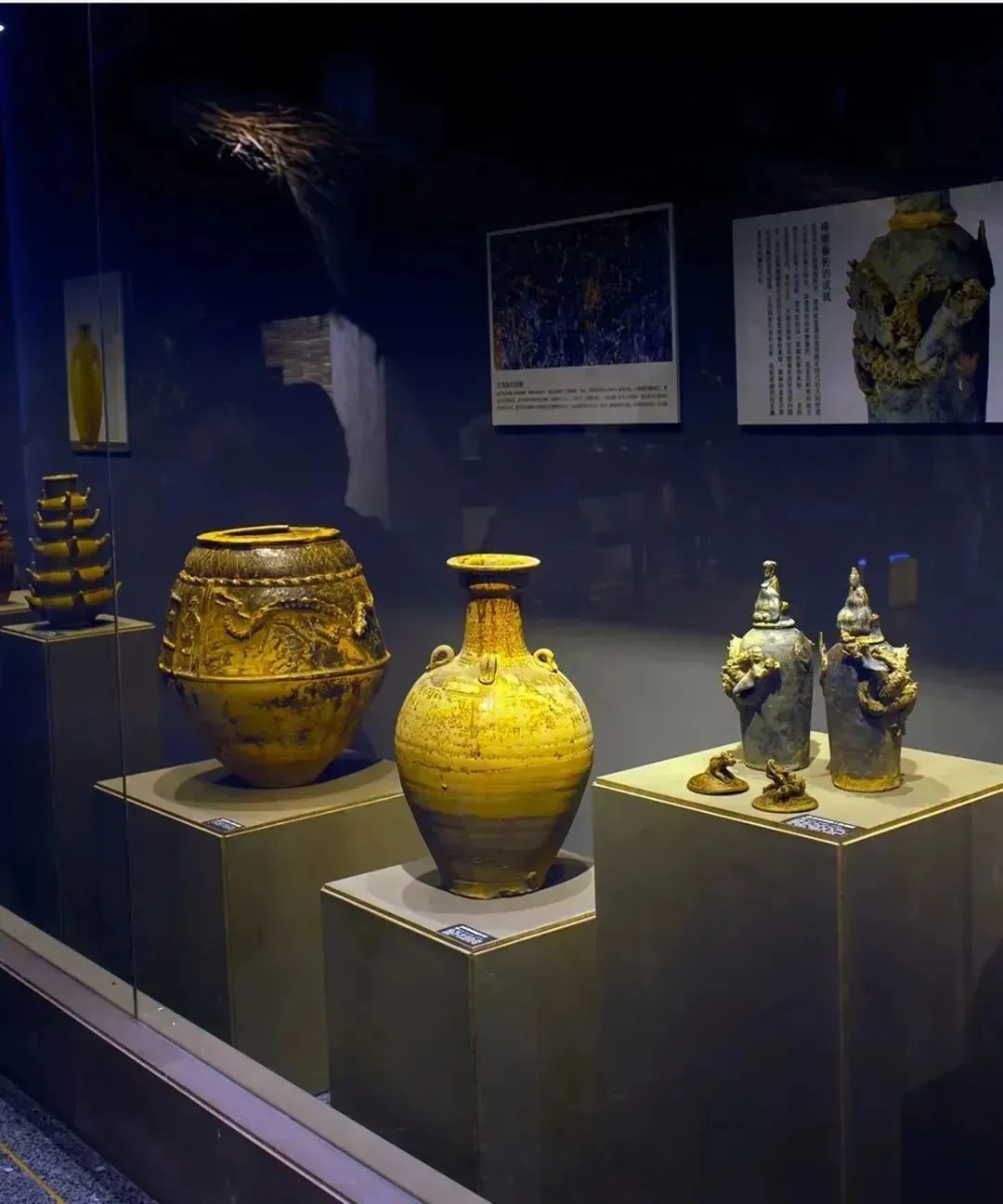 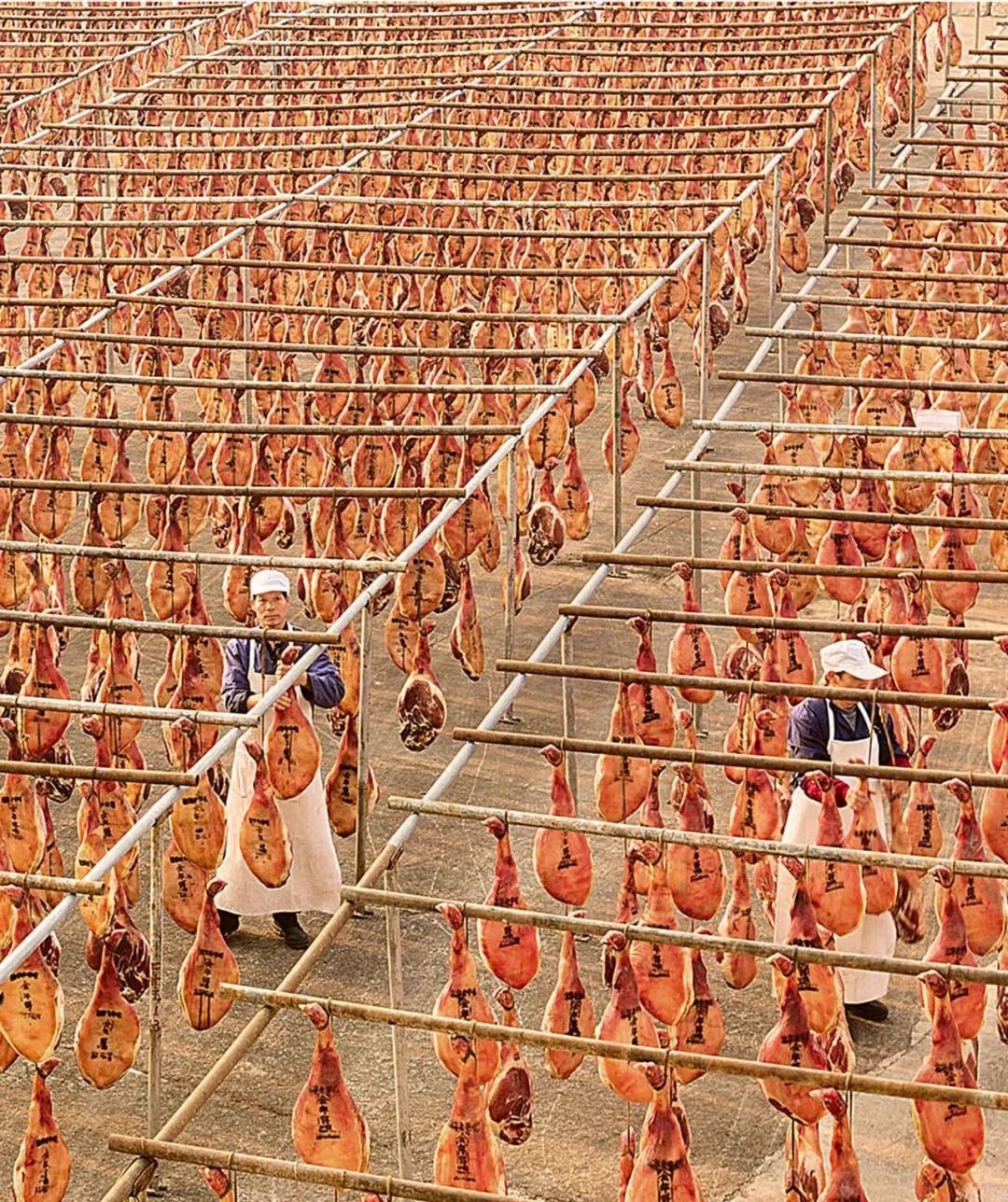 In the impression of many people, ham is Jinhua and Jinhua is ham. It is said that its pickling method was spread to Europe by Marco Polo in the early Yuan Dynasty. In 1905 and 1915, Jinhua ham won gold medals at Leipzig World Expo in Germany and Panama International Commodities Fair respectively. (Picture Yang Meiqing) 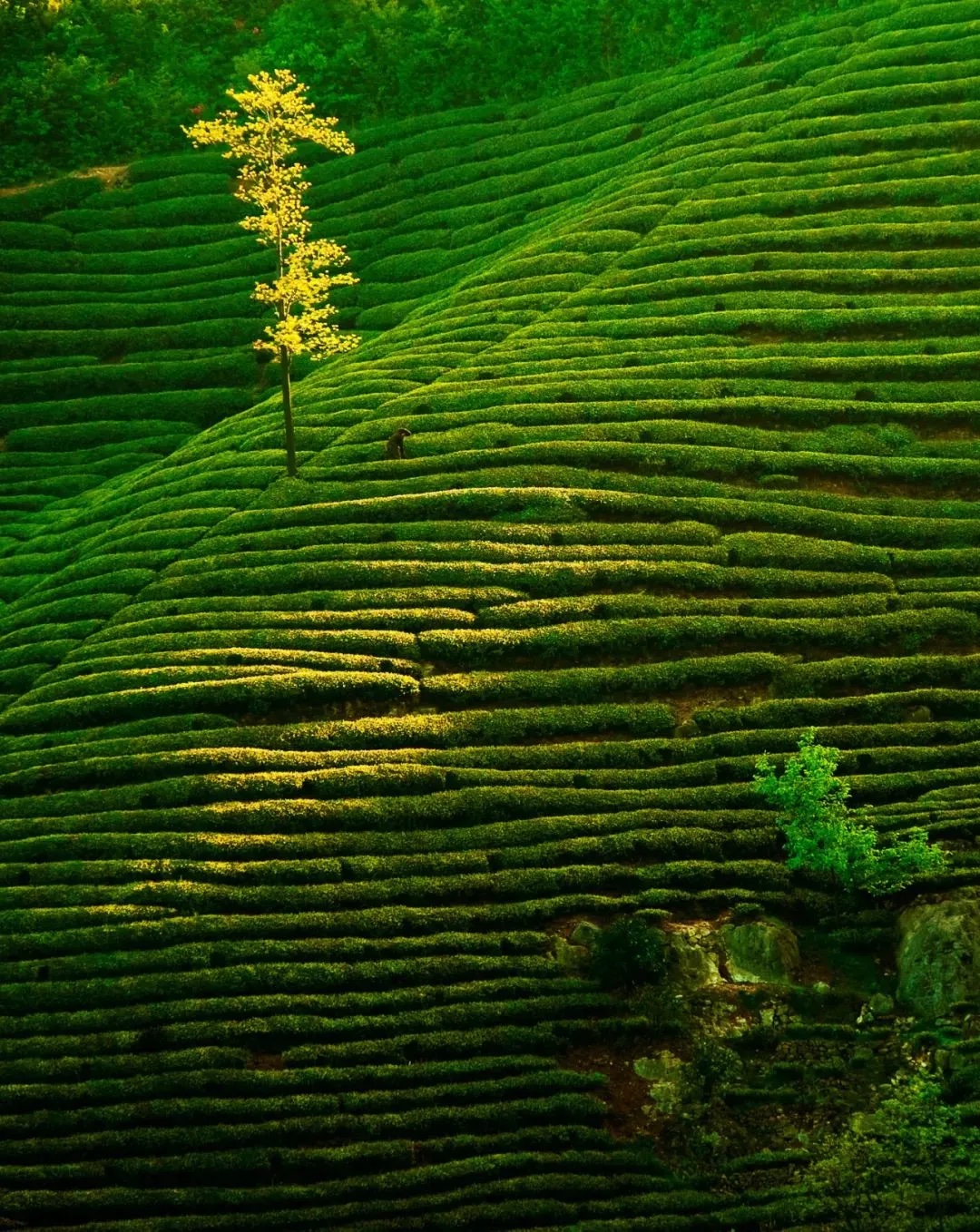 Jinhua started to produce tea in the Wu Dynasty of Three Kingdoms. Wuzhou Juyan Tea and Wuzhou Dongbai Tea became famous as early as the Tang Dynasty. Jinhua tea was exported overseas in early times either through the ancient Silk Road or through the Maritime Silk Road due to the developed shipping of Lanjiang River.

Dongyang wood carving is the representative of Chinese folk carving art and the carrier of Jinhua craftsman culture. As early as the beginning of last century, Dongyang woodcarving works were exported overseas.

Now, Jinhua has moved the “seaport” to the “doorstep.” One end is connected with the “Silk Road Economic Belt” and the other with the “21st Century Maritime Silk Road” Jinhua has become the golden hub of “The Belt and Road Initiative”

In the history, a key traffic path often leads to local prosperity. However, at present, it is hard to say which one is the precondition of the other. Nine railways and 11 expressways pass through the city. There is one 4D-class civil aviation airport and one general airport. A plan is being made to build 4E-class Jinyi International Airport. Jinhua is one of the national comprehensive transportation hubs. 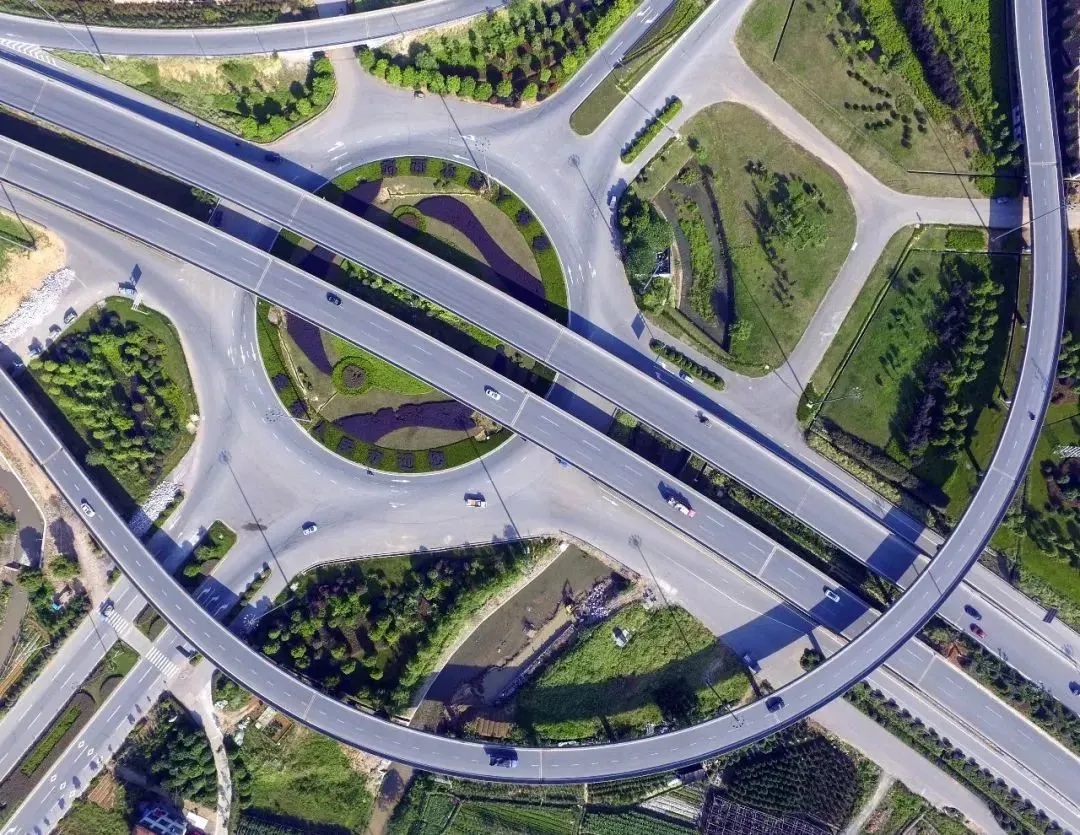 With more than 100 national, provincial and ministerial-level reform pilots and high-level platforms such as Jinyi District and Jinyi New District in Zhejiang Pilot Free Trade Zone, Jinhua has been entrusted with the historical responsibility of exploring the opening and development of inland areas and has become the most dynamic city in the Belt and Road Initiative. 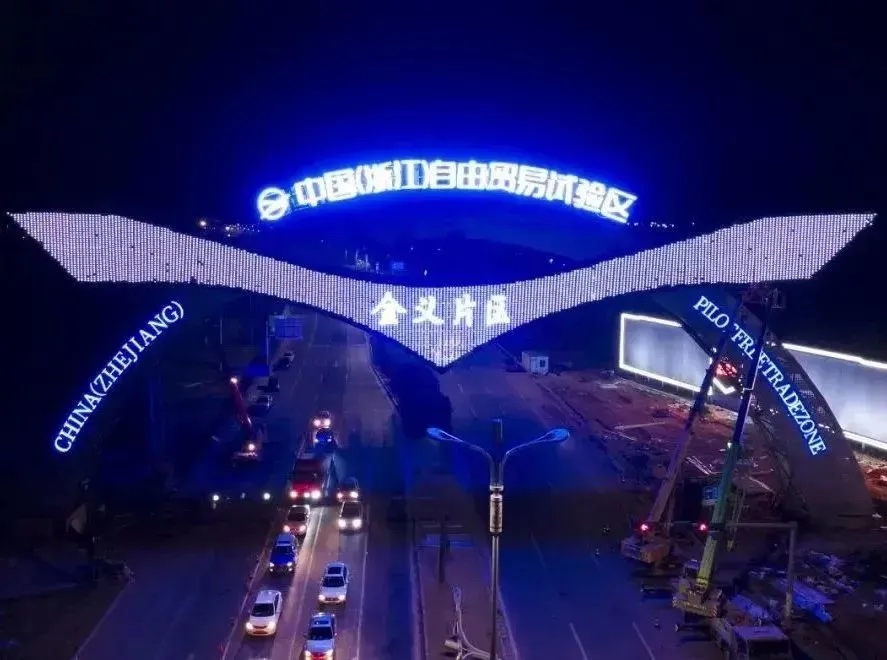 On September 21, 2020, the State Council issued a notice on the expansion plan of Zhejiang Pilot Free Trade Zone, which says that 35.99 square kilometers of land in Jinyi District became a part of Zhejiang Free Trade Zone. Jinhua stepped into “Free Trade Era.” (Picture by Ma Danqing)

that closely link the traffic path with the development mission. 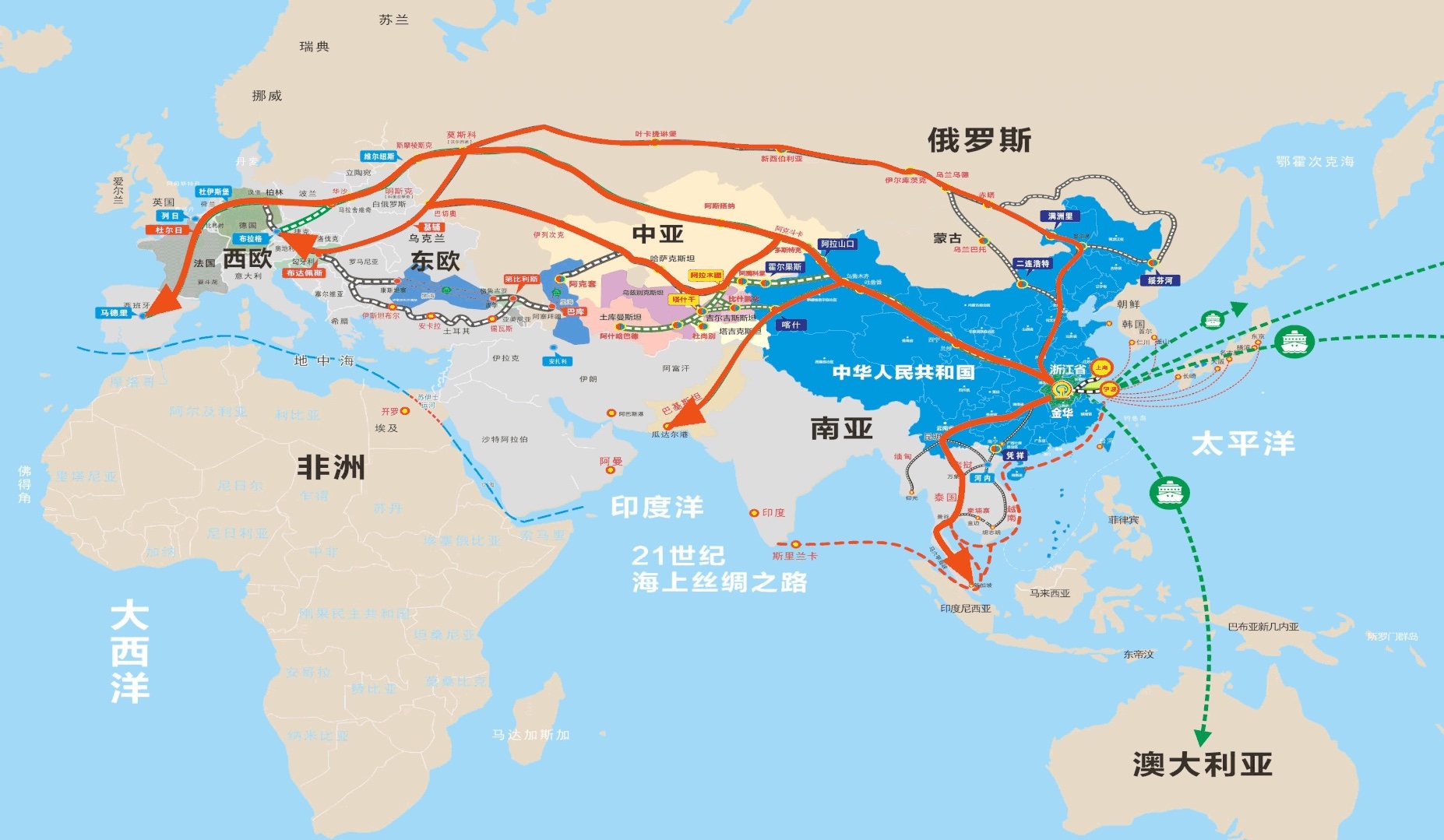 If you open the map of Zhejiang and draw a line between Jinhua and Zhoushan Port in Ningbo, you will find that this line connects the “Silk Road Economic Belt” in the west and the “21st Century Maritime Silk Road” in the east. This line connecting east and west is the Yiyongzhou Passageway. 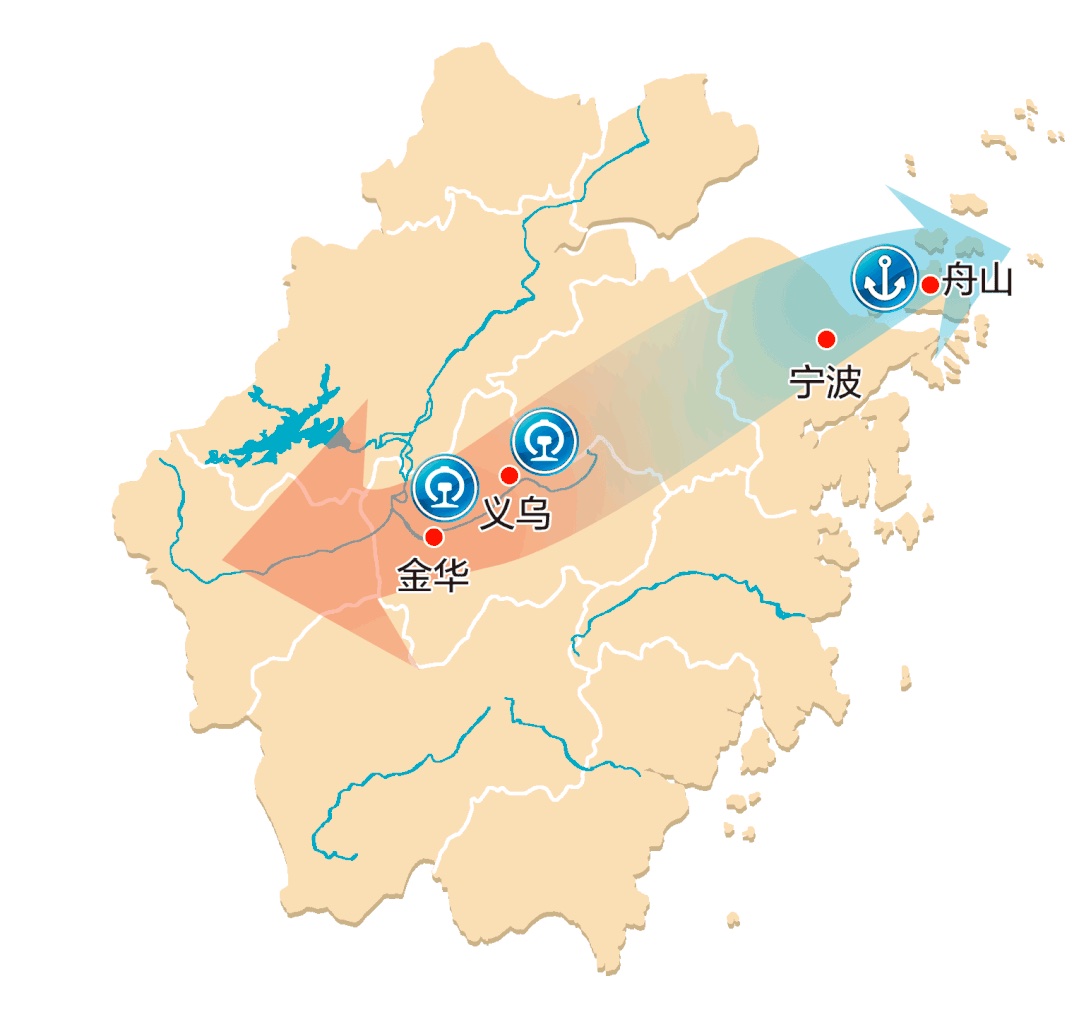 From west to north, accompanied by the distant train whistle, the China-Europe trains are busy going back and forth. On November 18, 2014, the first China-Europe train departed from Yiwu, which traveled 21 days and finally arrived in Madrid, Spain. In 2020, with the load rate and return rate ranking the first in China, Jinhua ranked the fourth among cities in China in terms of China-Europe trains. 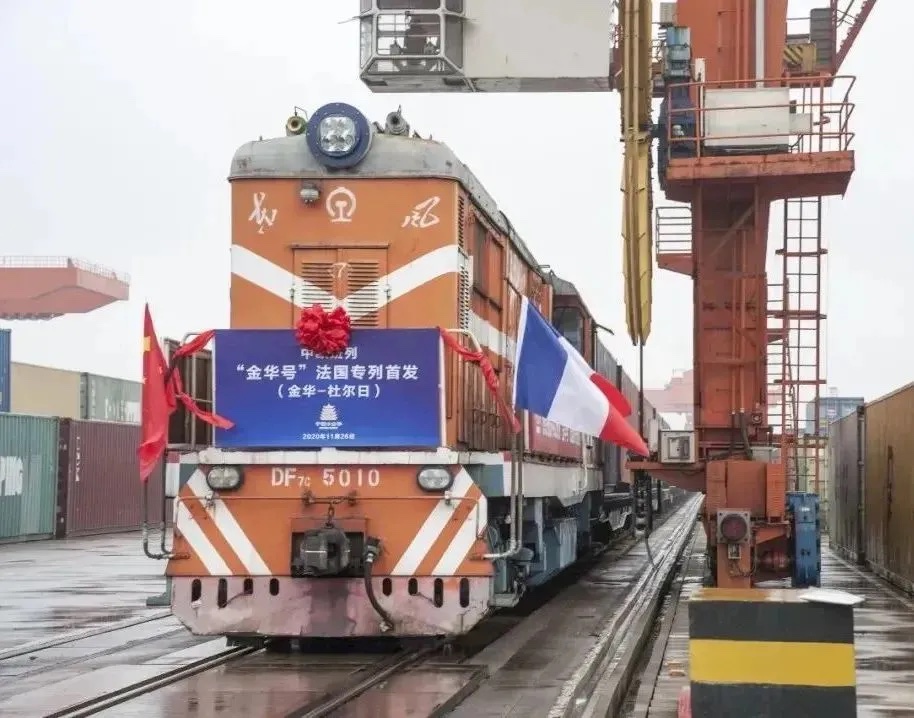 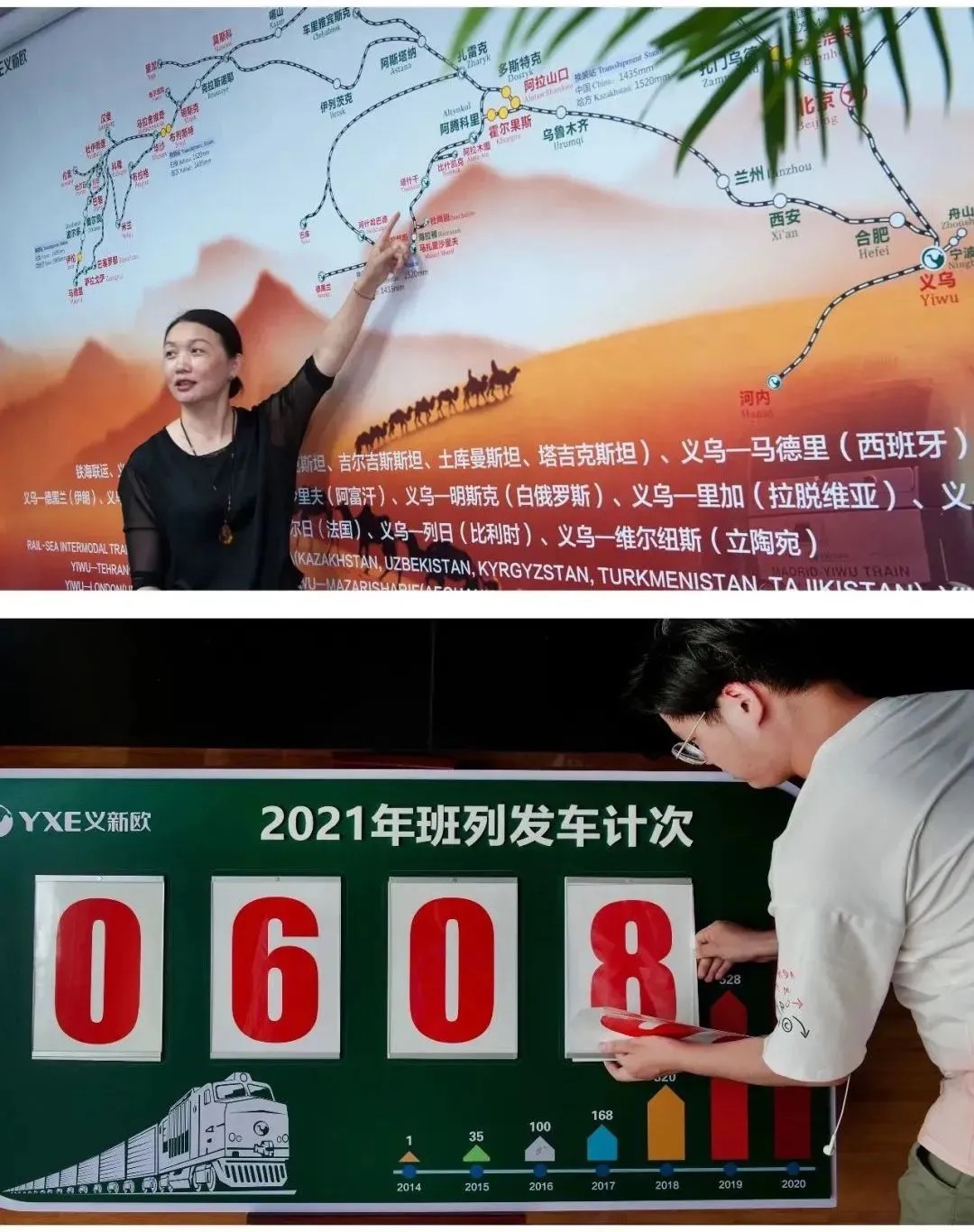 Zhejiang Tianmeng Industrial Co., Ltd. is the operator of Yiwu Platform of “Yiwu-Xinjiang-Europe.” As of May 27 this year, a total of 608 trains with 50,244 TEUs had departed from Yiwu Platform, and the number of TEUs increased by 223% year-on-year. (Picture by Qian Qiren) 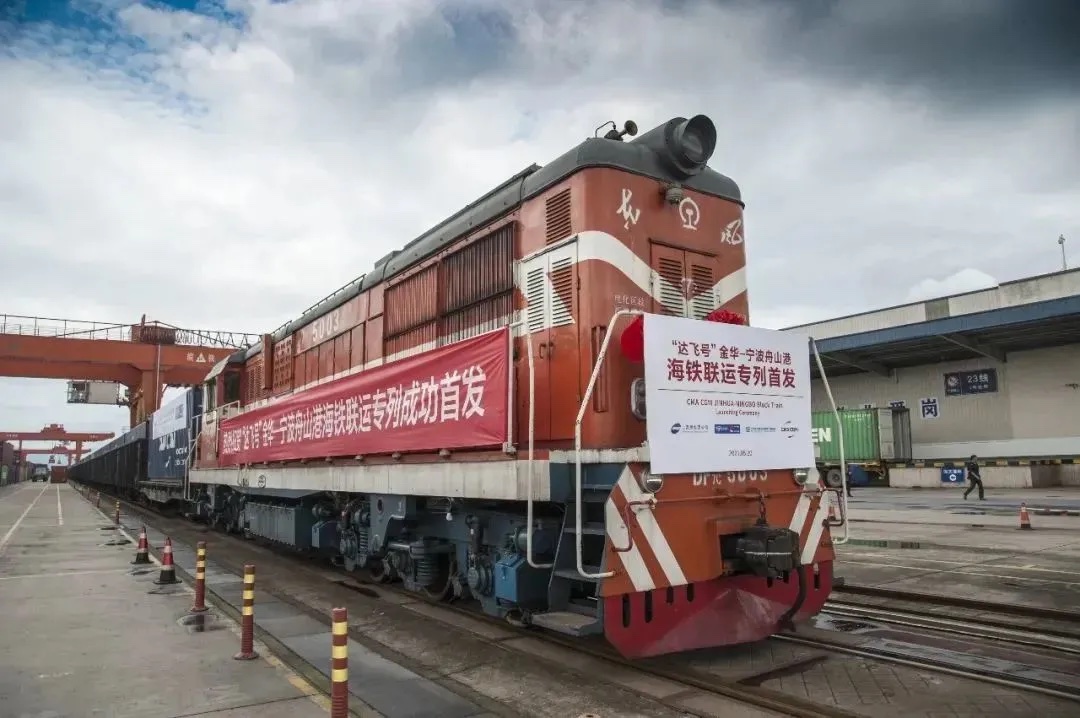 In Jinhua, a large number of goods depart from railway ports and arrive at Zhoushan Port in Ningbo continuously through sea-rail intermodal trains. (Picture by Hu Xiaofei)

This 300-kilogram package are scarves. Zhu Haifeng, the manager of Huzhou Best Embroidery Co., Ltd., sends a cart of scarves to Yiwu Port every month, which set out to sea by ship from Zhoushan Port of Ningbo via Yiyongzhou Passageway, and finally arrive in West Africa. (Picture by Qian Qiren)

Yiwu is speeding up the construction of Ningbo Zhoushan Port’s “Sixth Port Area,” which is the strategic fulcrum of the Yiwu-Ningbo-Zhoushan Passageway. Enterprises can complete the follow-up work such as picking up and returning containers and booking space in Yiwu Port, which saves time and reduces transportation costs. 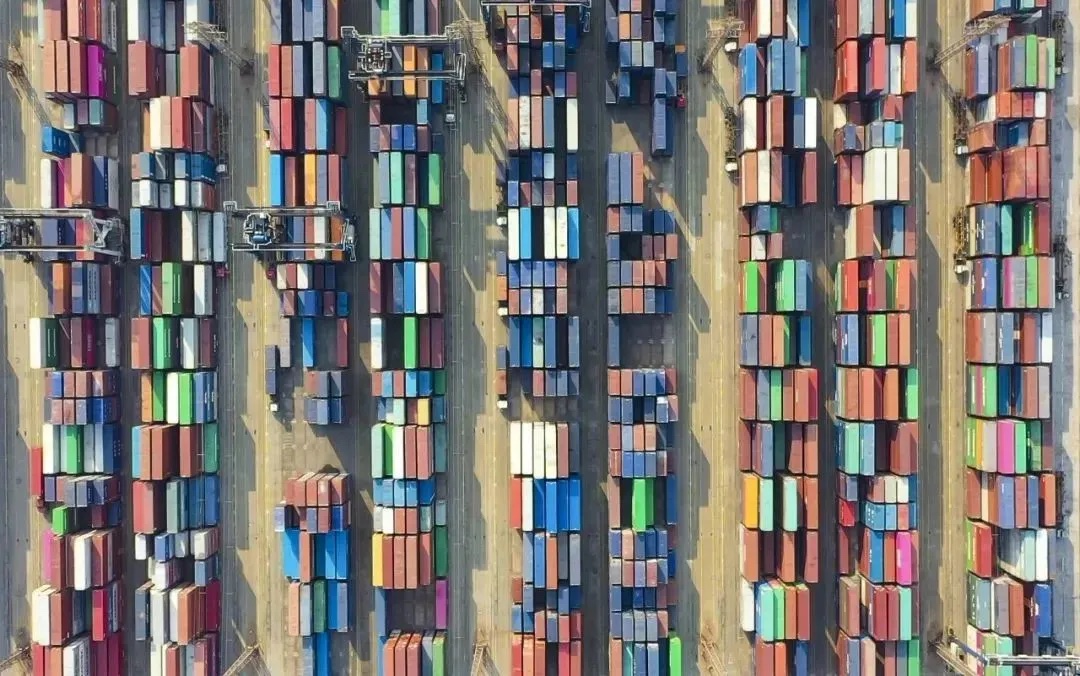 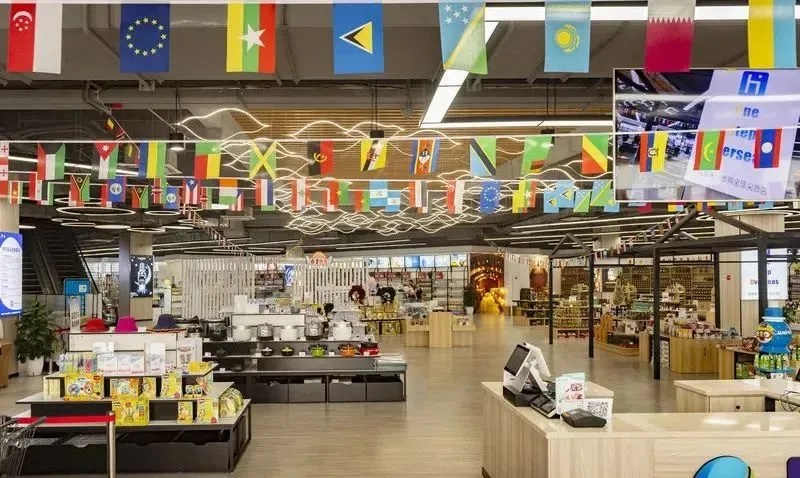 The direct purchase center of imported goods in Jinyi Comprehensive Bonded Zone enables ordinary people to have the experience of buying goods all over the world at home. (Picture by Hong Bing)

If the rise of “Yiwu-Xinjiang-Europe” and “Yiwu-Ningbo-Zhoushan” passageways and the building of "the Belt and Road initiative" gold hub are miracles, then it can also be said that many miracles created by Jinhua have given birth to these new miracles.

Jinhua brings together high-quality goods from all over the country. Because Jinhua is a big market, there are 91 markets with annual turnover exceeding 100 million yuan.

In the second district of Yiwu International Trade City, Zhang Jiying, chairman of Zhejiang Xingbao Umbrella Industry Co., Ltd., opened umbrellas with stories. In 1998, Zhang Jiying, who could not speak English, took a calculator and negotiated with a foreign merchant and concluded the first deal. Now, her umbrellas are sold to countries along the Belt and Road through the China-Europe trains. (Picture by Qian Qiren)

Jinhua is the online goods concentration place for cross-border e-commerce, because Jinhua is a big manufacturing city. There are 16 industrial clusters with an annual output value exceeding 10 billion yuan and 29 national industrial bases.

In particular, 75% of safety doors and 70% of cooking utensils in China are produced in Yongkang. Jinhua’s electric tool output accounts for about 1 out of 3 of the country’s total output. 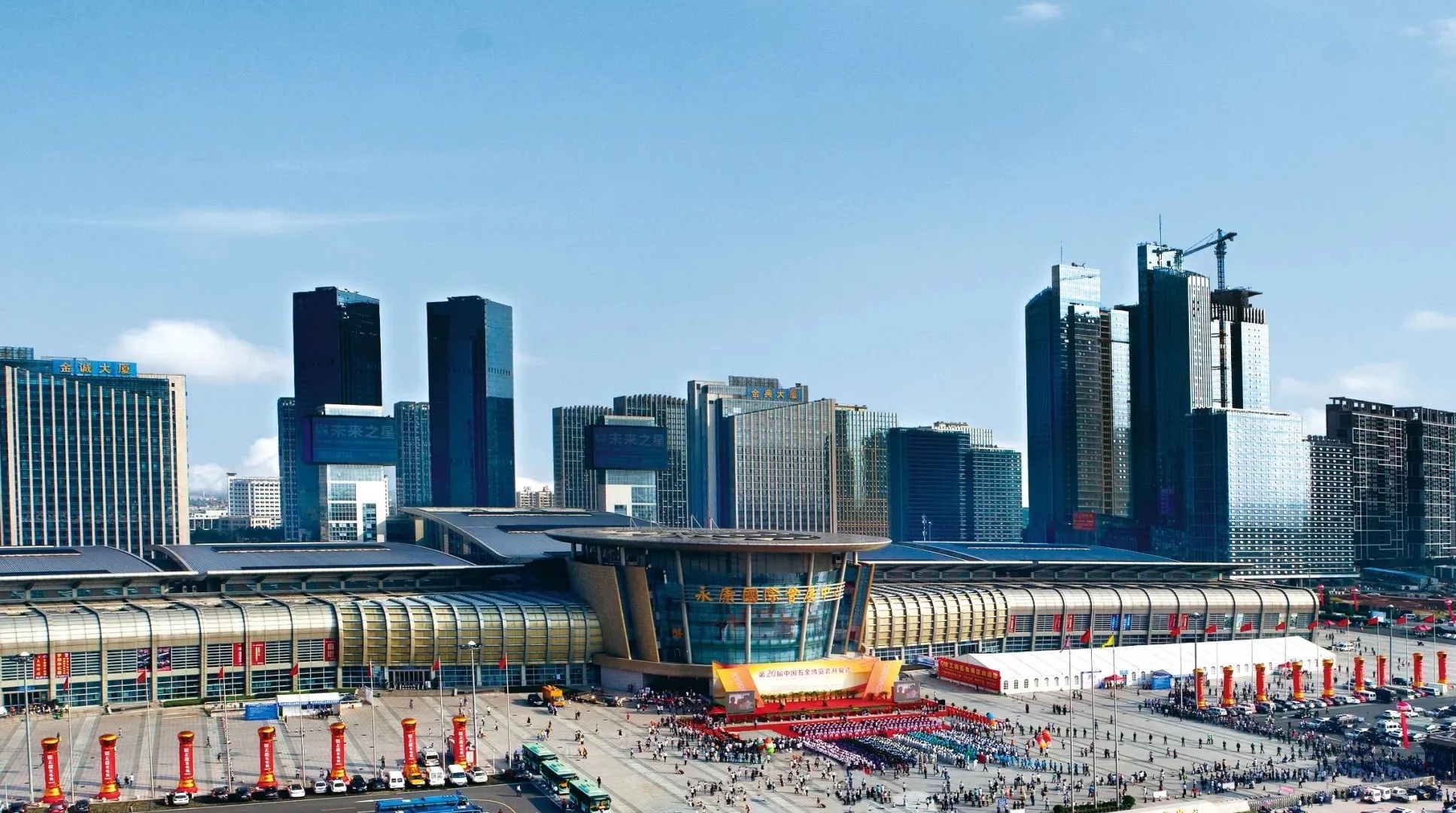 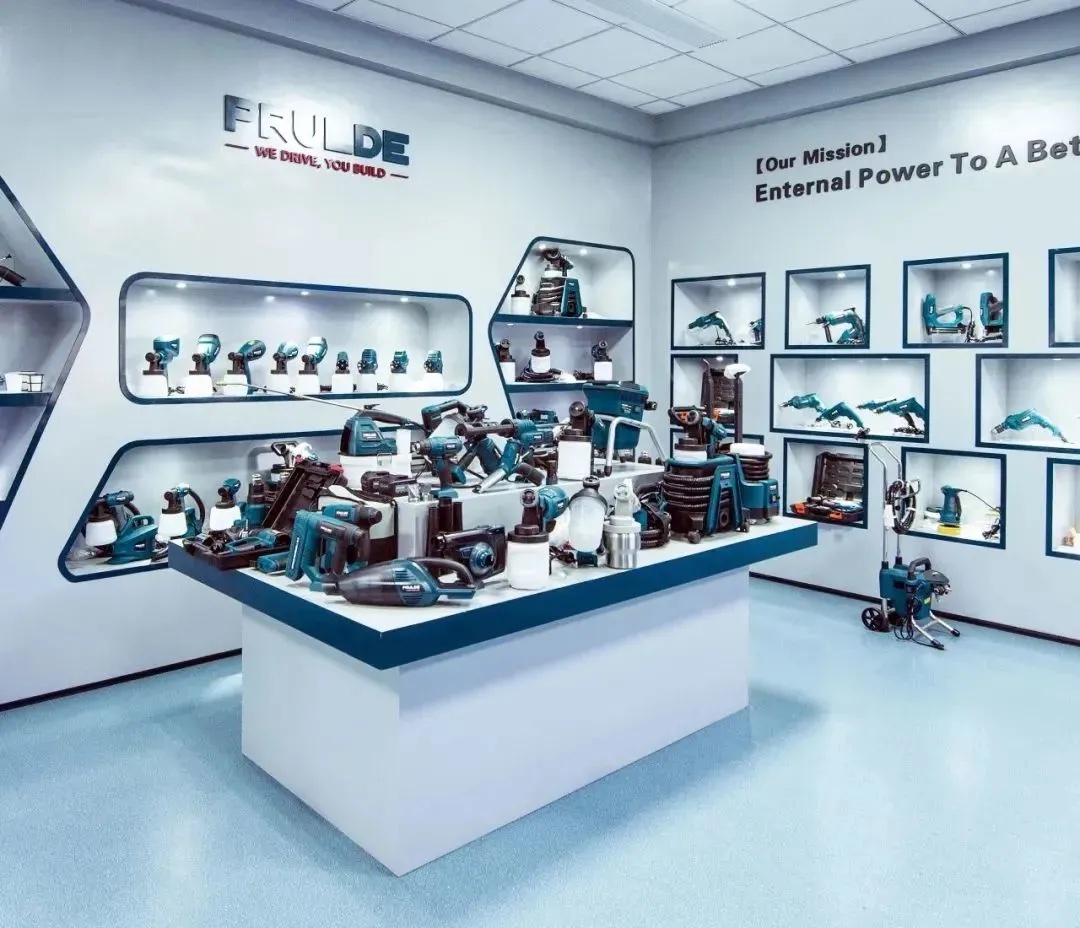 Exhibition Hall of an Electric Tool Enterprise in Jinhua

Jinhua is an important production base of textile products. The cotton elastic fabric produced by Lanxi accounts for 80% of the national market. The denim exported accounts for 1 out of 7 in China and 2 out of 3 in Zhejiang. 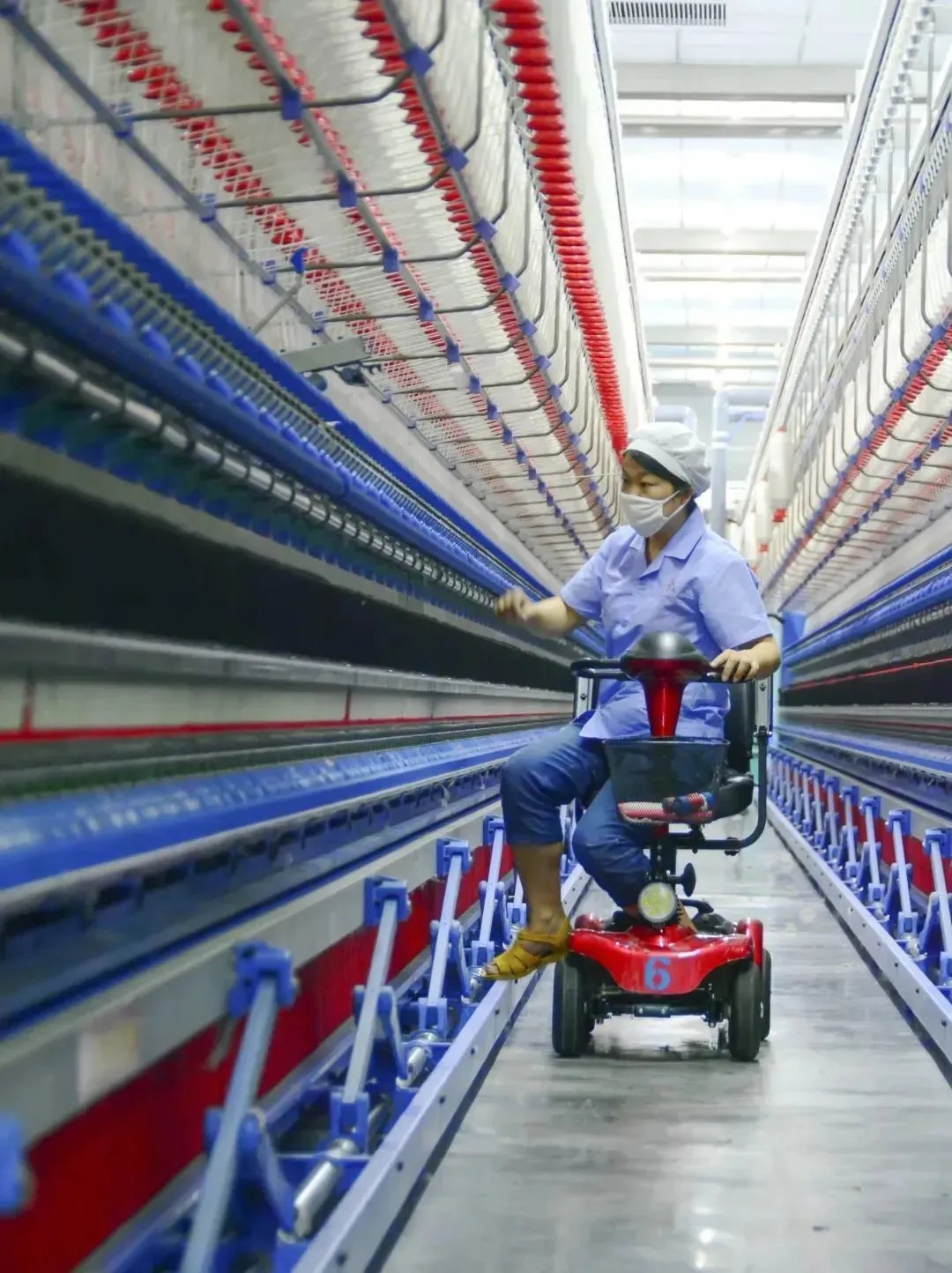 Jinhua is not only a production base for daily consumer goods, but also an advanced manufacturing base for high-tech products such as photovoltaic and electromechanical products. 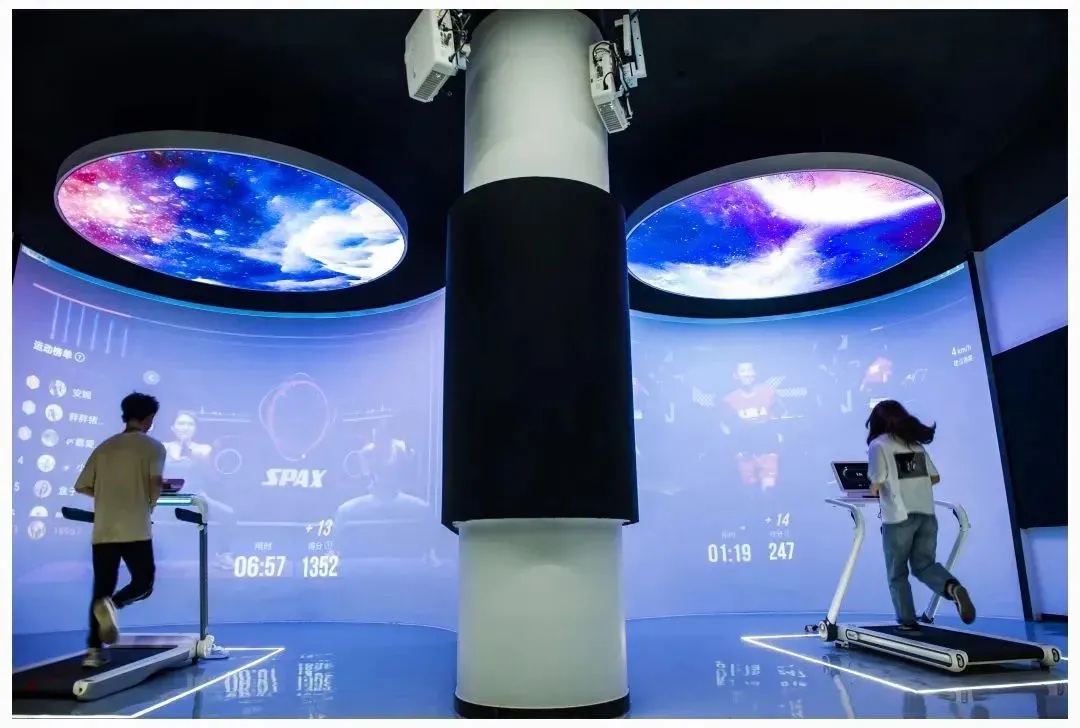 This is a treadmill integrated with black technology. Zhejiang Rongshun Technology Co., Ltd., located in Jinyi New District, has joined hands with Huawei to continuously develop and innovate. Its products have become the “best selling items” of JD.COM and cross-border e-commerce platforms such as Amazon for many years. (Picture by Qian Qiren) 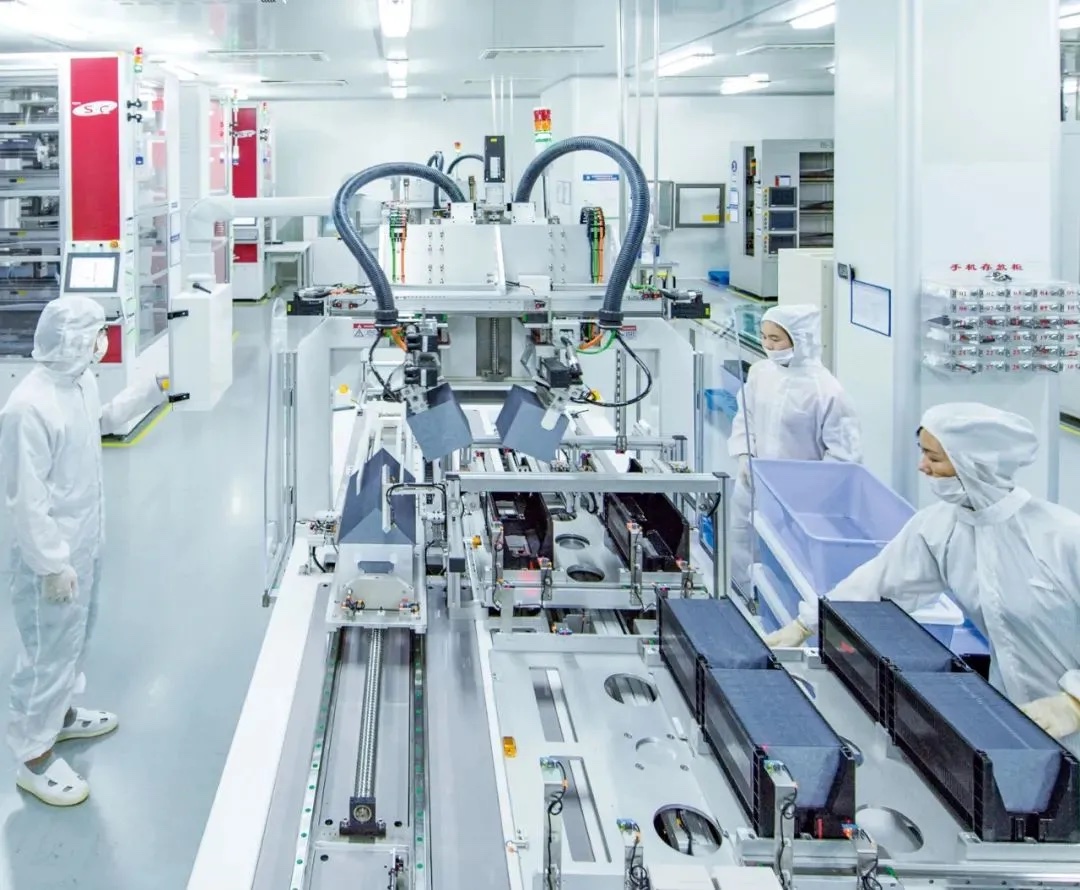 -THE END OF PART ONE-