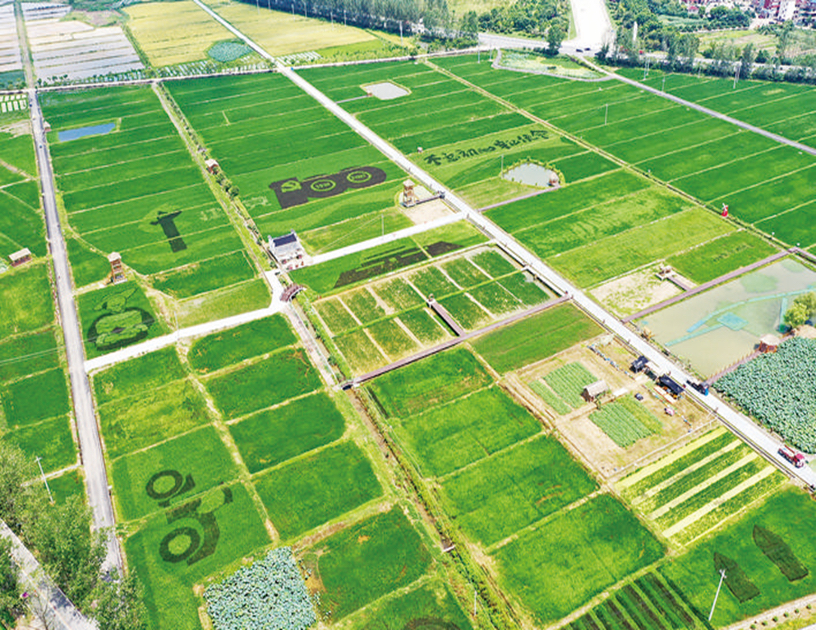 On August 16, with the arrival of the construction team, Colorful Rice Park in Qiaoting Village, Chi’an Town, Yiwu became energetic. “The best visiting period for the colorful rice is in mid-September. Now we are accelerating the construction of corridors, rest areas, and photography and check-in facilities to provide tourists a pleasant experience,” said Feng Xiangwei, head of Yiwu Jinsui Rice Professional Cooperative. Behind him, the colorful rice outlines a picture themed “Party Building.”

In 2019, in response to the rural revitalization strategy, the Party Committee and Government of Chi’an employed more than 333,000 square meters of transferred land in Qiaoting by leveraging the plan of constructing agricultural “standard land (land incorporated into industrial development and city planning)” as well as beautiful countryside. The government will spare no effort to promote the construction of Colorful Rice Park in the village.

As an important farmer in the park, Feng actively consulted professors at the Institute of Biotechnology of Zhejiang University for professional knowledge and maintained long-term exchanges and cooperation to promote the growth of the colorful rice. Meanwhile, Chi’an continued to deepen the reform of agricultural standard land, and promotes quality agricultural development based on the construction of beautiful fields, such as providing public welfare infrastructure construction for large agricultural households, including production base, irrigation and drainage facilities, walking paths, slopes, pavilions. The government will also offer subsidies on such projects.

At Colorful Rice Park, the sentence “Stay true to the Party’s original aspiration and the founding mission,” the pattern of the Party flag, and the images of the two historical figures Da Qiao and Xiao Qiao are outlined by rice. Concentric circles are shaped by black and purple flowers. After the official opening of the park in Qiaoting at the end of September last year, the colorful rice field with picturesque patterns amazed the citizens passing on Yiwu Highway. Feng mentioned that during the last national holiday, the park drew nearly 20,000 tourists on a daily basis, and in just three months since the park’s opening, it has had more than 300,000 visitors.

In addition to the colorful rice, the park has a two-meter-high giant rice experience area, a rice-fish symbiosis area, a lobster fishing area in a lotus pond, a waterwheel experience area, and a vegetable picking area to create entertaining learning for children. During the harvest season, many student teams came to the park to study. “In addition to the local students in Yiwu, there are also many research teams from the nearby counties and cities such as Jinhua, Dongyang, Yongkang, and Pujiang. The park received more than 1,500 students a day,” said Feng.

In mid-June, Feng temporarily closed the fields due to the rising temperatures, and he focused on creating the new colorful rice patterns with students from the Institute of Biotechnology of Zhejiang University. Because this year marks the 100th anniversary of the founding of the Party, the colorful rice pattern they created was themed “Party Building.” In spite of the temperature-related closure, many parents still took their children to visit the “camp” every day during the summer vacation. At the end of last month, there were also travel agencies and school family committees meeting with Feng about the new semester’s studying issues.

To date, the park has become a successful attempt to integrate agriculture, education, and tourism. The spokesperson of Chi’an stated that the park takes rice culture as the theme for its project, and the art of rice fragrance as the highlight of the leisure-agriculture landscape. It explores the system of “watching, learning, experiencing, and entertaining” for the agricultural park, and it has become one of the important windows for the town to create beautiful countryside in the new era. (By Zhu Xiang, translated by Zhang Jiajia, edited by Kendra Fiddler)