In the ancient village of Fotang (佛堂 lit. Buddhist Hall), few places are named or related to the Buddhist tradition. 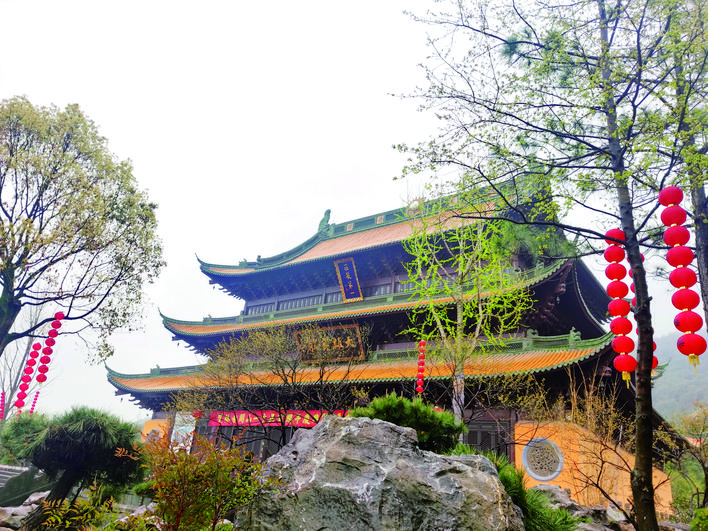 Legend has it that the village’s connection with Buddhism originated from the millenary Shuanglin Temple.

Visiting the temple on a rainy day brings about a particular sense of tranquility. Despite being located very close to the center of Fotang, the temple appears surrounded by Lake Shuanglin in the front and Yunhuang Mountain in the rear, as a natural barrier, according to the geomantic tradition of Feng Shui. Amidst the hazy atmosphere of low clouds, Shuanglin Temple seems like a hidden residence in the mountains.

Dating back to about 1500 years ago, the temple is quite famous: During the Later Zhou Dynasty (951-960), the temple was referred to as “the third most important in China and the most important one in the Jiangsu-Zhejiang region”; during the Jiading years of the Southern Song Dynasty, Emperor Ningzong (r. 1194–1224) of the Southern Song introduced a system of government for Chan temples, “Five Mountains and Ten Temples,” among which Shuanglin Temple ranked number eight.

Just by entering the temple, one can feel the Chan atmosphere expressed by the poetic writings of the temple’s earliest ancestor, Master Fu (Chinese: 傅大士 Fù Dàshì; 497-569):

Holding the hoe in his empty hands

Walking around, riding his buffalo

When one is crossing a bridge,

is the bridge flowing, or the water?

Shuanglin Temple presents a majestic view. In the early morning, the monks ring the temple bell, the vigorous sounds of which echo among the hills. Legend says that Master Fu was 24 years old when he went fishing at Jiting Pond (located in today’s Jiting Village, Fotang) and encountered a mendicant Buddhist monk  from India, Song Toutuo (嵩头陀; also named Dharma), who awakened him to his true destiny of erecting a Buddhist temple at the feet of Yunhuang Mountain and leading a life of manual labor combined with Buddhist practice.

In a small hut of grass and wood, Master Fu led a pious life for 20 years, until 540, when Emperor Wu of Liang issued the imperial order to build the Shuanglin Temple. The temple prospered during the Tang and Song Dynasties, but it was damaged by Fang La’s rebellion under Emperor Huizong of the Song (1120-1121); in a decade, though, the Temple was restored and counted 1200 cells for monks. Following ups and downs during the Yuan, Ming, and Qing dynasties, the temple was almost destroyed by war and by fire in the Republican era.

Master Hui Ji, supervisor of Shuanglin Temple, explained that the biographical history of Chinese Buddhism counts over 2000 eminent monks, but very few of them are known as dashi (大士 lit. disciple of Buddha) masters. Native of Yiwu Fu Xi is one of them, and can be considered one of the first Buddhist masters of China. In fact, Master Fu was the initiator of Chan Buddhism in China, combining intellectual practice with social engagement. His theory of human nature became the core and source of Chan Buddhist studies for later generations, which granted him the title of one of the “Three Masters of Liang,” together with Bodhidharma and Baozhi (418-524).

Shuanglin Temple played a far-reaching cultural role, as illustrated in Selected Poems and Essays on the Ancient Town of Fotang, a work edited by local historiographer Wang Chunping. The book contains 261 poems dating from the Liang Dynasty to the Republican Era. The first 20 poems, just a selection out of a larger number of poems, are related to Master Fu and Shuanglin Temple.

Mr. Wang claims that the harmonious combination of three philosophies—Confucianism, Buddhism, and Taoism—advocated by Master Fu had a crucial impact on future generations of thinkers and scholars. Among them, Wang Anshi, Su Dongpo, Zhou Dunyi, and Zhu Xi were particularly influenced by Master Fu, while later generations of literati like Luo Binwang, Dai Shulun, Lang Shiyuan, Yuan Zhen, Liu Yuxi, and Nalan Xingde participated in the intellectual dialogue, paid visits to the temple, and chanted about its legends.

Zhang Huijian, dean of the Yiwu Shuanglin Cultural Research Institute, believes that there is a close connection between ancient scholars and Shuanglin Temple. Luo Binwang (619-684), Yiwu native and one of the Four Paragons of the Early Tang, and Wang Anshi (1021-1086), prominent literary figure of the Northern Song, are the most representative examples. In 681, Luo Binwang made a return to Yiwu on the occasion of his mother’s funeral, and left an inscription on the walls of Shuanglin Temple, chanting the deeds and moral conduct of two cousins—Jia Xiao and Jia Tanying:

Are identical in moral conduct and achievement.

Jia Xiao was a military general of Liang, and after retiring from his military career, he became a disciple of Master Fu at Shuanglin Temple; Jia Tanying was the donor of the piece of land where the temple was built.

Four hundred years later, Wang Anshi was grand chancellor of Song, and a portrait of Master Fu hung in the hall of his building. After retiring, Wang lived secluded in Nanjing and became close with Zen Master Zan Yuan of Dinglin Temple. Zan Yuan was also a native of Yiwu and a descendant of Master Fu. Wang and Zan visited Shuanglin Temple once.

In the history of Shuanglin Temple, influential monks appear in large number, and their reputation spread to neighboring countries such as Japan, Korea, and Vietnam. An inscription commemorating “Master Fu from Shuanglin Temple of Wushang County, Dongyang Prefecture” is preserved at Waseda University, Japan.

Since the Tang and Song dynasties, Japanese Buddhists have admired Chinese Buddhist culture, its natural sites among the mountains, and its temples. Many have traveled to Zhejiang to learn Chan Buddhism. Starting from over 20 people during the Northern Song, the number of Buddhist disciples from Japan reached hundreds during the Southern Song, Yuan, and Ming dynasties. The primary destinations were the temples in Tiantai, Taizhou, and Shuanglin, Yiwu.

Some eminent Chinese monks who lived in Shuanglin Temple also went to Japan to preach. Among these, the most famous one is Mingji Chujun (1262-1336) who was abbot of Shuanglin. In 1330, he was invited by the Japanese Buddhist circles to travel eastward, where he was highly respected.

Mingji Chujun was also a good man of literature who played an influential role in Japanese literature. Many of his poems have been passed down to this day. It is said that in 1987, Tetsuo Suzuki, professor at Aichi University and deputy director of a research institute of Buddhism, visited Shuanglin Temple and said: “The Japanese Buddhist community esteems and keeps in great consideration Master Fu.” (Text and photo by Wang Lei, translated by Marco Lovisetto, edited by Kendra Fiddler)