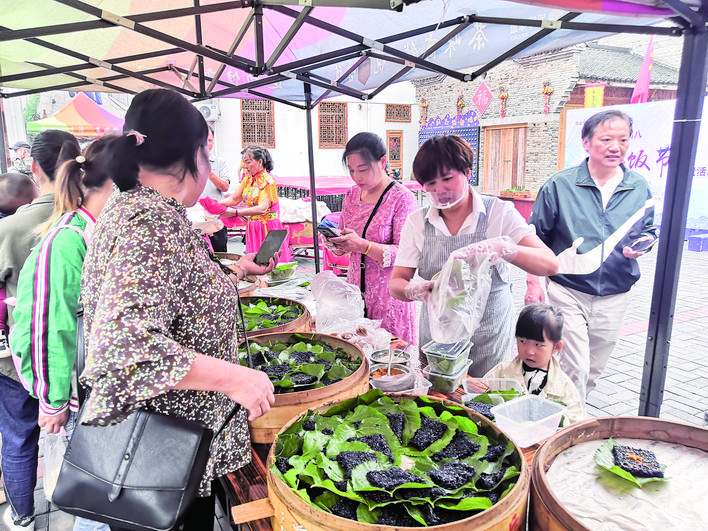 From May 19 to 21, the Wufan Rice Festival was held in Luobu Town, Jinhua. Local people use vaccinium bracteatum leaves to dye rice grains nearly black, which is called “wufan rice”. Local residents and tourists from other places gathered at Xinglong Square in Old Luobu Street. The street was crowded with many stands, and the wufan rice stood out among the dazzling snacks.

Luobu Town has been a center for merchants since the Ming and Qing Dynasties, and many traditional folk customs still exist there today. According to local custom, on the eighth day of the fourth month of the lunar calendar, people eat wufan rice to drive away mosquitoes. As the temperature increases, so do flies and mosquitoes. Legend has it that a person will not be bitten by mosquitoes if he or she eats wufan rice. As a result, local residents have always cooked wufan rice at home, and also sold it at stands during the Wufan Rice Festival.

“Compared with the wufan rice sold in the urban area, I think the rice in Luobu tastes softer and better,” said Ms. Lin, a tourist. There were many tourists like Ms. Lin who not only tasted the wufan rice at the stands, but also bought some to take with them when they left. The wufan rice sold out quickly that day. (By Gong Xiaobing, translated by Li Ziyi, edited by Kendra Fiddler)