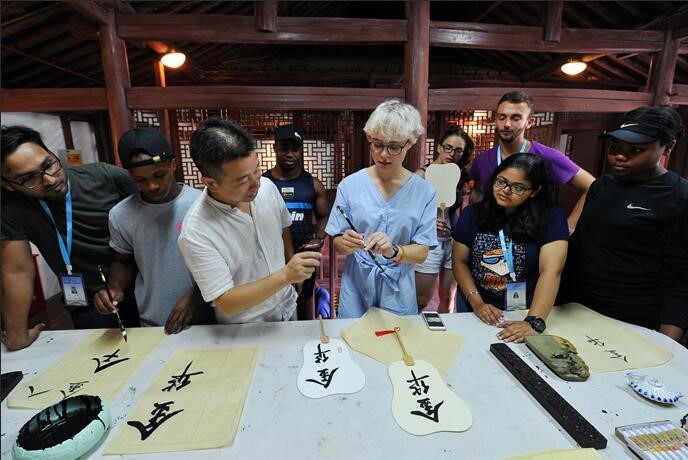 On August 18, in a lecture on calligraphy held by Lutian Academy, He Jianqiang, a member of the Zhejiang Provincial Association of the Calligraphy Review Committee, introduced the origin, history, and distinguishing characteristics of Chinese calligraphy to the international participants, as well as several masterpieces of the famous calligraphers of each dynasty. After the lecture, He began to teach the participants how to write the Chinese characters of Jinhua, 金华 (Jīnhuá) using the basic calligraphy strokes.

Wu opera is one of the local operas in Zhejiang Province, and it was approved by the State Council in 2008 to be included in the national intangible cultural heritage list. The Zhejiang Wu Opera Troupe performed an episode of Golden Monkey in the New Year and displayed the art of Bian Lian (Face Changing). The audience applauded the performance and took out their mobile phones to record the dazzling art. (By Zhu Zheping, translated by Li Ziyi, edited by Kendra Fiddler)