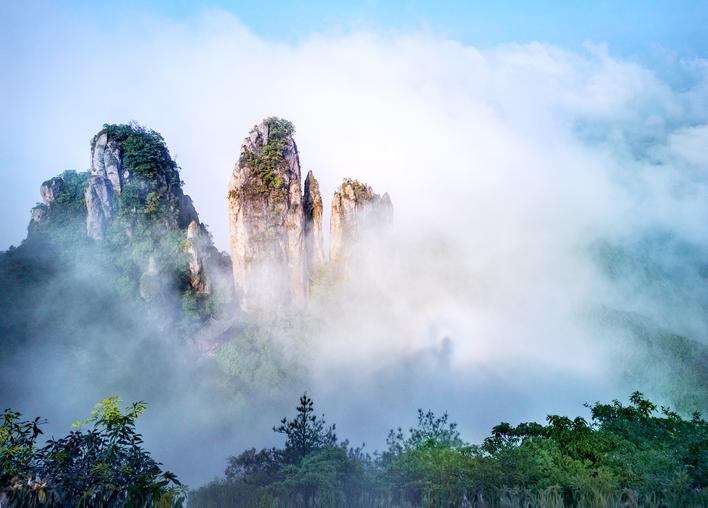 Xianhua Mountain, also known as Xiangu Mountain (仙姑 lit. Immortal Female, related to the Daoist tradition), is located a couple of kilometers north of Pujiang County. It is a well-known mountain in the middle of Zhejiang.

Its main peak is called Shaonü Peak (少女 lit. Young Girl) and is 720.8 meters above sea level. Legend has it named after Xuan Yuan’s youngest daughter Yuan Xiu, who, according to Daoist tradition, ascended to heaven here. Since then, the peak has been known as “the first immortal’s peak.”

In literary works throughout China’s history, plenty are the descriptions of the natural landscape around Pujiang. Xianhua Mountain is the most common among these spots.

During the Tang Dynasty, Indian eminent monk Qiansui Baozhang (414-657) practiced here; during the Song, Fang Feng (1241-1322) identified and wrote about eight majestic scenes of the mountain; Wu Lai (1297-1340), scholar of the Yuan Dynasty, described Xianhua Mountain, “Like a showy, emerald lotus / like a colorful phoenix soaring into the skies.” During the Ming Dynasty, Liu Ji (1311-1375) wrote about Xianhua, and Song Lian (1310-1381) praised it as “a land of absolute beauty between the earth and the heavens.”

Wang Zheyao, tour guide at Xianhua Mountain Scenic Spot, suggests taking the east route, which goes through the eight spots mentioned in Fang Feng’s poem. Standing at the main entrance and looking eastward, one can see the five main peaks of Xianhua Mountain: Yusun, Yugui, Yuchi, Xiantan, and Shaonü, the last of which is the highest one and stands at the end of the eastern route.

A single-door stone archway opens the hike with four inscribed characters expressing the idea of “beauty among clouds” (云间秀色). On the gate’s sides are written Liu Ji’s verses: “Xianhua is majestic and mystic; looking at it, clouds float up to the firmament.”

After hiking up for about 15 minutes, one can see the Jinkengling Reservoir, which gives the impression of looking out at the ocean. Going up a little further, at the intersection with the west route is the ancient cave of Tonghai, which, as one of Fang Feng’s sites, is called Shenxue Xufeng (深穴嘘风 lit. Deep Cavern of Exhaling Wind). Wang Zheyao explains that in the mid-winter season, the entrance of this cave is breezy and presents an almost mythical atmosphere.

From Tonghai Cave, an additional 25-minute hike brings the traveler to Shaonü Peak, also known as Head Rock, East Peak, and Yuzhu Peak. Wang points at the horizon around us, explaining that when clouds and mist begin to evaporate under the sunlight, colorful halos tend to appear, which are extraordinarily beautiful and remarkable. This place is the most famous of Fang’s eight spots, Huazhu Danguang (华柱丹光 lit. Magnificent Post of Red Light). The phenomenon is quite rare, but according to local villagers, colorful halos can be seen on the east side of Xianhua Mountains several times a year, especially when the sun shines after the rain.

The peak of Pujiang literature was reached between the end of the Song and the beginning of the Yuan Dynasties. Fang Feng and renowned literati of the Yuan Dynasty Wu Lai and Liu Guan were part of this period. Their influence was crucial, as, for instance, Wu Lai was preceptor of Song Lian, known as the head of the founding civil servants of the Ming Dynasty. The prominent school of Pujiang played an enlightening role in the literary scene of Ming.

Literary works of this period left a strong mark also on depictions of Xianhua Mountain, including the most famous and typical by Song Lian, who lived on the mountain for 10 years and composed a large number of creations.

In 1350, Song Lian moved from Jinhua to Pujiang, entering Xianhua Mountain as a Daoist monk. He then lived there under the monastic name Xuan Zhenzi. On the west side of the mountain, Song found a remote place called Xi’an Mountain (西安 lit. Western tranquility). Song was very satisfied with that idyllic location and decided to settle in a hut and live a secluded and isolated Daoist life there.

In those 10 years, Song wrote several works, including Puyang’s Biographies, a two-volume edition which collects the biographies of 29 people who exemplify one of five categories: loyalty and righteousness, filial piety and brotherly love, government affairs, literature, and chastity.

This is a major historical collection of biographies of natives of Pujiang before the Ming Dynasty, and is also a crucial contribution to the conservation and transmission of the local culture of Pujiang. It is worth mentioning that Song Lian left a historical comment which praises Xianhua Mountain:

“The soil of Pujiang does not exceed a hundred li, but Xianhua Mountain rises from the ground, and its mystical shapes resemble those of flying banners, lotus flowers, and iron horses.”

Xianhua Mountain is not only a landing place for those looking for seclusion, but also a place longed for by cultural celebrities of history.

Zhang Ming, director of the Cultural and Historical Committee of the Pujiang County CPPCC, wrote an article entitled “Gui Youguang at Xianhua Mountain.” In the article, Zhang claims that according to the records of Zhang’s genealogy, Gui Youguang (1507-1571) traveled twice to Xianhua Mountain. The first time was in the spring of 1532. Attracted by its fame, Gui visited the mountain; while hiking toward the peak, he encountered an old man who “led a dog and a horse and brought liquor and fish, hunting in the mountain.” The old man was Zhang Yonglu, known as Sir Wan Shan, whose father Zhang Shuxuan was the ancestor of the Zhang clan in Qili and the descendant of the Zhang clan of Longxi. Wan belonged to a rich and powerful family, but he did not forget the less fortunate and the poor, being an example of filial piety and brotherly love.

The young talent, Gui, and wealthy old man, Zhang, got along well together, talking happily with each other. The warm and hospitable Zhang Yonglu invited Gui Youguang to spend more than a month in his home, and the two became very close friends. Gui also wrote an epitaph for Yonglu’s father, Zhang Shuxuan, whose tomb is in today’s village of Xianli, Shiliting, Xianhua Subdistrict.

Twenty years later, in 1557, Gui returned to Xianhua Mountain to discover that Zhang Yonglu had already died. For his old friend, Gui wrote a foreword which is conserved until today in Gui’s Records of the Virtuous Wan Shan.

In visitors’ souls, Xianhua Mountain is like a natural pearl, penetrating people’s hearts with its uncut and majestic visage. (By Yu Han, translated by Marco Lovisetto, edited by Kendra Fiddler)